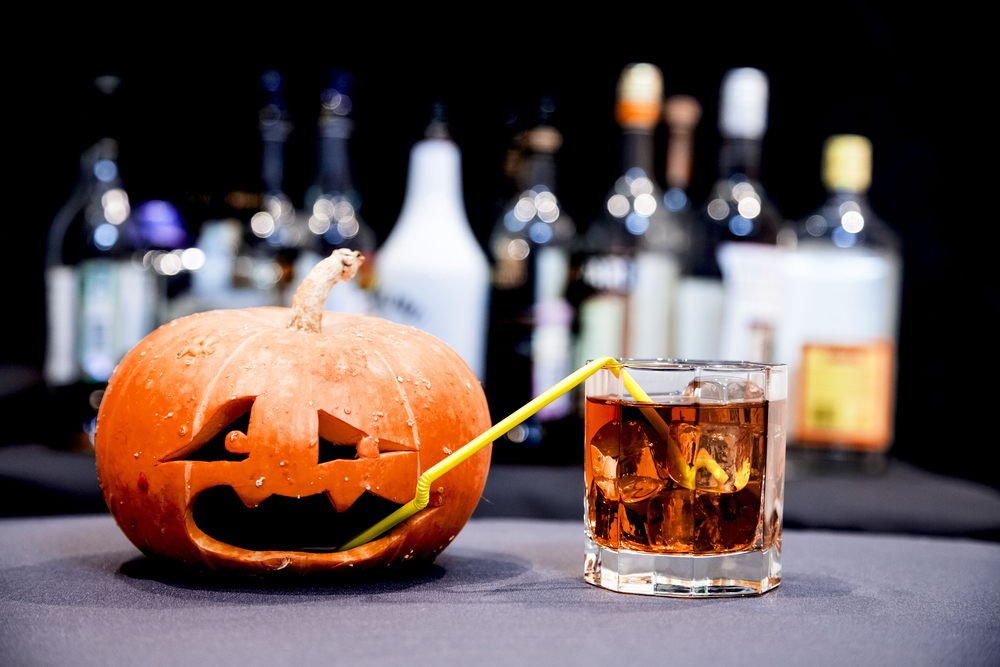 Sure, dressing up in a costume and collecting candy from strangers was a thrill when you were a kid — but now that you're over 21, chances are you're looking to up the Halloween game just a bit. Want to get into the spirit of the holiday and have a wild time? We're talkin' boozy hayrides, insanely haunted houses and one word that sums it all up: Vegas. Grab your killer costume and plan to have a wild night at one of these 11 hot spots. The Blackout Experience in New York and Los Angeles How about this for adult-only entertainment? You have to sign a waiver before you enter this 18-and-older haunted house because you will experience “extreme horror, tight spaces, darkness, fog, strobe light effects, exposure to water and physical contact.” The actors can touch you! You may experience pretend waterboarding! This place is so hardcore, you're given a "safe word" to use when it all becomes too much. Likely, that would be three minutes in. Fright Dome at Circus, Circus in Las Vegas, NV Celebrities like Paris Hilton, Kevin Hart, and Stevie Wonder have all made their way to this haunted hot spot located on the world-famous Las Vegas Strip. What’s in store? Well, let’s just say the Travel Channel named it one of the most extreme haunted houses in the world with six new haunted houses and four all new scare zones. Scare. Zones. (Too much for you? There are also more mild rides in the Adventuredome.) Halloween Costume Contest and Party at Margaritaville and Landshark in Atlantic City, NJ With over $2,000 in prizes given in costume categories like Scariest, Best Tropical and Most Original (this top prize wins $500) the Halloween Parties at Margaritaville Restaurant and Landshark Bar in the Resorts Casino and Hotel Atlantic City are not only fun — there's a chance to take home some cash! Plus, there's no cover charge to grab up the drink specials and check out the deejay at these rocking' venues on Oct. 29, which both get going at 10pm. The Great Jack O’ Lantern Blaze in Sleepy Hallow, NY Take your childhood love of carving pumpkins and kick it up a notch. Situated along the riverside near Van Cortlandt Manor, 7,000 intricately carved pumpkins are lit up for one heck of a spectacular display. Not only will you look at pumpkins, but there are stargazing opportunities inside the Pumpkin Planetarium, flying ghosts, and a special appearance by Sleepy Hollow’s Headless Horseman. It's less than hour from NYC, so make sure to bring some drinks for the road (aka train). Corn Mazes When you’re a kid, your parent takes you around the maze, but these ten mazes found across the country are so detailed you may not be able to get out. Up for the challenge? Check out these crazy mazes: The Great Vermont Crazy Maze (the crazy design changes each yer), Sever’s Corn Maze (in its 16th year), Kraay Family Farms (made in the shape of the world’s largest QR code), Treinen Farm (which is 14 and a half football fields), and more. Or check out Margaritaville's own list! Ghost Tours Why see fake ghosts at a haunted house when you have the chance at seeing legit ones? Located all over the country in some of the spookiest cities like New Orleans, Gettysburg, Salem, New York, and Tombstone, Arizona are guided tours of old houses and areas that are haunted. Hear real ghost stories from some rather animated guides and get ready to have nightmares for days. New York Haunted Hayride in New York City Described as “vicious, disturbing, and haunting,” this is a hay ride like any other. On your ride, you’ll encounter ghostly apparitions, demonic possessions, backwoods hillbilly country, slaying and flaying, even the good ole friendly neighborhood ice cream ripper will just get you started down a brutal ride. For the first time, hayrides will experience the debut of three experiences including House of Shadows, where guests will be hurled into a sea of darkness with nothing but the hands in front of their faces and a whole lot of evil lurking around them. Pumpkin Carving Classes Forget your average Jack-o-lantern, there are classes throughout the country geared towards learning some pretty wild (not kid-friendly) pumpkin carving designs. Take this class in Breckenridge, Colorado, for example. It is led by Barry Brown, a master pumpkin carver who has been featured on David Letterman, The Tonight Show and Good Morning America. Just hit the Google search button to find a place that helps you become a master pumpkin artist. Halloween Horror Movie Marathon There’s nothing better than getting in the Halloween spirit by watching a flick that scares the pants off of you. Sure, you can watch one in the comfort of your home, but there are theaters all over the U.S. that host full-fledged festivals. One of the most famous it The Coolidge Corner Theatre’s Annual Halloween Movie Marathon where they have a costume contest as well. Or, you can check out the NYC Horror Film Festival, A Nite to Dismember in Los Angeles, and the Massacre 2016 Horror Marathon in Chicago. Also, be sure to check out your local theaters as they might be hosting a special showing too. Boozy Bike Tour Halloween Theme Rides Booze meet boos. On these group bike rides you pedal around town with your pals dressed in costume while drinking on-the-go. While this type of experience is only allowed in some cities (Nashville and Austin for example), make sure to hop on one for Halloween if there is one near you. Don’t worry there’s someone doing the steering if you have one too many.