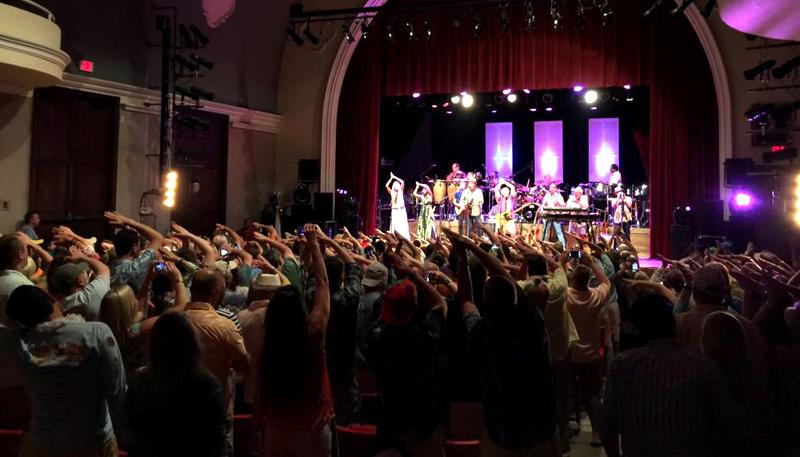 It was about 10:30pm when Jimmy ended the Key West Set List Show on stage alone with his acoustic guitar. He and the Coral Reefer Band had played for 3 hours and as I stood in the balcony during the final song, Nautical Wheelers, I realized I had witnessed something beyond special. Over 70,000 people had submitted a set list for a chance at two tickets and only 200 people were there in person. When Jimmy announced this on stage the crowd erupted knowing how lucky there were to be there. Jimmy Buffett in Key West is like seeing Bob Marley in Jamaica or Elvis in Memphis. An icon performing in a place that when mentioned is synonymous with the artist. When the crew arrived at the venue with the band gear we couldn’t believe what we saw. The place looked tiny compared to the photos we’d seen during our Google chat meetings. From the stage it looked like you could reach out and touch every seat. These are the places where you know JB is going to be in his element. The performer becomes the storyteller and you see how his craft serves him to this day. Jimmy has always wanted to play the San Carlos Institute but didn’t think he would have the chance. During his Key West days the theater was “too sophisticated” for him. Bars or streets were the only places that allowed him to play and the fact that he got to perform in a restored theater on Duval Street 40 years too late didn’t escape him. In these smaller venues Jimmy speaks to everyone as if he is talking to each individual. This personal connection allows us to relate to his stories in a way that make us feel like we were there with him and shared that moment. I can’t think of a better moment with Jimmy Buffett than to share a performance of his in Key West, where most of his stories took place and continue to follow him on his song line to this day. As we walked around Key West for three days we ran into streets, bars and signs that all served as creative inspiration for Jimmy. It’s like an open air museum to a song catalog with free admission. I don’t think another place has been captured in writing as well as Key West has and we can thank Jimmy for every song that takes us there. The energy backstage before the show was relaxed but you could feel Jimmy’s excitement. Six months of planning and preparation went into the Set List Contest and during that time Jimmy and the Coral Reefers worked up over 100 songs. The winning songs turned out to be a lot of the hits played at most concerts but Jimmy, not about to let his hard work go for nothing, added some songs to the set list he thought should have won. In between songs you could have heard a pin drop while the audience listened to every word as he told stories and thanked his Margaritaville.TV crew for all their hard work. The audience wasn’t rowdy but attentive. They were witnessing history and they didn’t want to miss anything. The night consisted of laughter, dancing and singing all in hopes Jimmy would keep playing. People who saw the Set List Show tell me they now want to go to Paris for the concerts in September. Once you see Jimmy in a theater you understand you are seeing Bubba in his throw back days where it all started. Jimmy tells us the Key West show has him ready for the new Workin and Playin Tour. It’s going to be fun to see what songs make the set list this year on any given night and I think that will make going to the shows or watching them on Margaritaville.TV all the more special. When he shows up for each concert this year get ready for some songs you may not have heard in a while and be prepared to see him smiling. This oldest surfer continues to have some surprises up his Jamaican wristbands. Fins Up! -- Heikki Larsen Margaritaville.TV