Dispatch From the Road: October Shows and the Margaritaville Hollywood Beach Resort 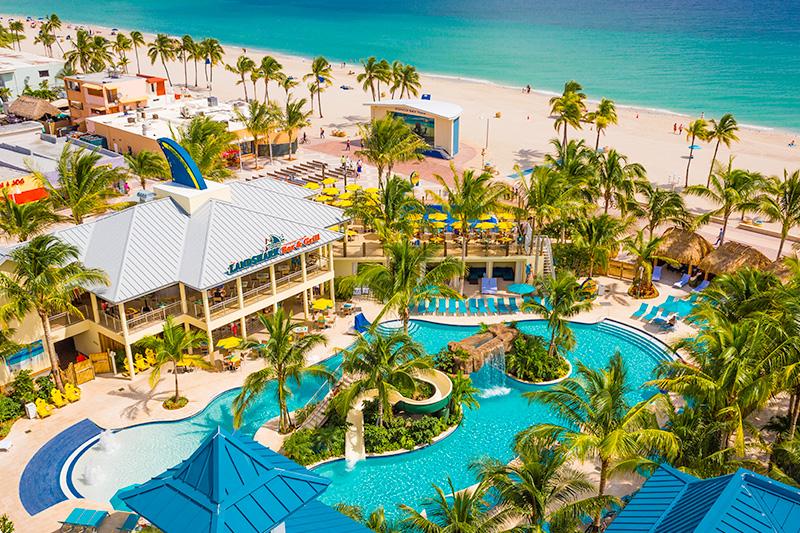 Let’s get right to it, shall we? October meant the end of the Workin’ n’ Playin’ Tour for 2015 and we had a great time. It was a busy month where we visited some familiar places, saw some new ones and stopped by the Meeting of the Minds Convention in Key West.  We saved the best for last when we attended the grand opening party at the new Margaritaville Hollywood Beach Resort for Jimmy’s concert on the beach. Good work if you can get it! The two concerts that stand out to me from October are the Albuquerque and Hollywood Bowl shows. Albuquerque was one of the worst weather days we’ve had on tour in a while. I think the temperature dropped 20 degrees after lunch when the rain started. There was a sliding door backstage that blocked the stage from the loading dock. When we opened that door at sound check it was a wind tunnel. I have to give a big "Fins Up" to the faithful fans that tailgated and partied at the show. They made the best of it and JB gave it his all to transport them to someplace warm.  Those of you who saw the photos on social media saw JB in a long sleeve shirt, vest, pants and shoes on stage during the concert. Not even the contents of a red Solo cup could keep him from wearing the additional wardrobe. The Hollywood Bowl was a sight to see. The list is long with famous names that have played there. It was built in the 1920s with the Hollywood Hills and famous Hollywood sign as the backdrop. Looking down from the top orchestra seats of the venue you can see what a great place it is to see and hear a show. The sound was amazing at this open air venue. There are a number of box seats at this bowl complete with waiters and dinner if you order it in advance. I don’t know how many dinners were ordered but there was a lot of dancing. It’s a historic venue and those places make for great shows when you don’t play them often. Something about playing in a special place that makes the show elevate. JB and the CRB have a way of finding that level. We made our way to Key West for the MOTM 2015 event and were met with hot weather and a JB show people were waiting for. His evening performance for the dedicated Parrotheads consisted of playing the entire White Sport Coat on a Pink Crustacean album with the Coral Reefer Band. During the show he told stories about each song and the inspiration that helped him write them. He told the packed crowd that "I Have Found Me a Home" was the first song he wrote in Key West. That night "Railroad Lady" may have been the first time he ever played the song live. He went on to tell stories about other songs leading up to the end of the show with "Margaritaville" and "We Are the People Our Parents Warned Us About." If you haven’t been to MOTM, it’s something to see. If I didn’t know the real story of "We Are The People," I would think it was written about this convention. They are some of the friendliest Parrotheads you’ll meet (aren’t they all friendly?) and they all have great stories to share. Good Jello shot recipes, too, if you like that sort of thing. :) We packed our bags a week later for Hollywood Beach, FL and set up shop at the Margaritaville Resort. Let me say that from the moment you step in the lobby, you are greeted with the feel of a high-end hotel and the friendly Margaritaville spirit. The lobby is elegant but relaxed. High ceilings, beach house foyer that has you walk buy a giant flip flop that serves as a beacon where friends can meet before they go outside to the pools. The chandelier made of margarita glasses is a nice touch and I may ask for one for my Christmas bonus! There are two giant pools outside and one on the 11th floor located at the License 2 Chill Bar (by the far the best view of the beach and property). At the beach level next to the pools you’ll find a LandShark Bar and Grill, Margaritaville Café, Lone Palm Bar and a Flowrider surf pool. Top it off with a 1956 Airstream trailer called Floridays that serves as a food truck on the Broadwalk. We had one day to shoot a video of us touring the property for you all to enjoy. We hope to post that soon so you can get a better idea what’s in store for you there when you visit. We’re taking a little time off for the holidays but already working on the New Year’s Eve show in Brooklyn at the Barclays Center. We hope to kick off a podcast in December so stay tuned for that and if you are thinking about gifts for the holiday season treat yourself to a trip to the Margaritaville Hollywood Beach Resort. If we see you there we’ll buy the boat drinks. Happy Thanksgiviing and Fins Up! -- Heikki Larsen Margaritaville.TV