Dispatch from the Road: Take It Easy Glenn Frey 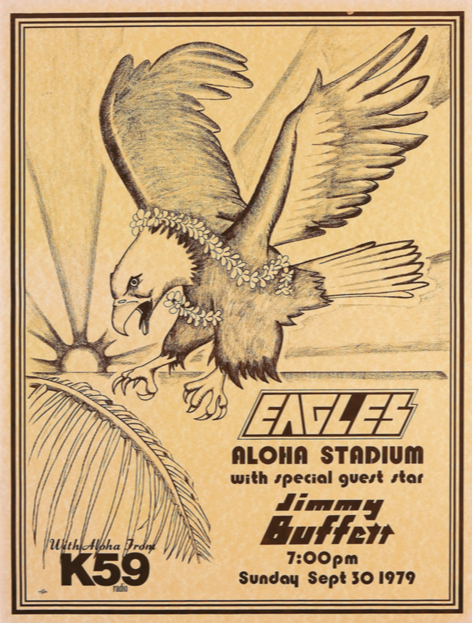 Margaritaville's very own Heikki Larsen has worked with Jimmy Buffett for years on great projects such as Margaritaville TV videos and live shows. Be sure to check out his other posts in his Dispatches from the Road series, where Heikki keeps us all updated on the thoughts, reactions, and antics of being on tour. Recently, we lost Glenn Frey. I got a text from my dad telling me and I felt like I had lost a close friend. I had never met Glenn Frey but after listening to his songs for most of my life I felt like he and the Eagles would always BE. His passing is especially sorrowful for our Margaritaville family because of his connection with Jimmy and the influence he had on his career. Jimmy’s connection with the Eagles started in the mid seventies. It was Jimmy’s first big break to open for them and during that time friendships were made. At the time Don Henley and Glenn Frey were spending time in Aspen, CO and so was Jimmy. There were some great parties back then and when one of your friends was Hunter S. Thompson, you knew there were going to be some good times. There’s a video on YouTube of Jimmy and Glenn Frey playing Margaritaville at Aspen High School and in the background you can see Hunter smoking, unable to sit still. Like Jimmy, Glenn Frey was a notorious competitor and sports fan. Glenn’s house was next to Jimmy’s in those days and one day Jimmy decided to get satellite tv. When Glenn saw the satellite dish on Jimmy’s house he had one put on his. During this time Glenn was known in town as the Commish because of his dedication to having the best softball team in Aspen. He had the best players in town on his team while Jimmy’s team was made up of players that stayed out all night and showed up for the game with boom boxes and coolers filled with beer. Glenn’s team was called the Werewolves and Jimmy’s team was called the Down Valley Dough Boy. Most times the Werewolves would play their game and then go find the Down Valley Dough Boys to watch them play and drink all their free beer. Glenn knew if he found Jimmy he’d find the party. Jimmy is smart when given an opportunity so when he was on the road with the Eagles he took in as much as he could from how a successful tour was run. Success starts with happiness and on the road that starts in the kitchen. The Eagles had great catering and Jimmy understood how a good meal could make it a great day. If you’re traveling for most of the year you want to have some form of comfort from home and a good meal helps. Keeps you from being homesick or pissed off. The Eagles also introduced Jimmy to the quick out. That’s when the show is done and you go immediately to your van or car and leave the building. You don’t stick around backstage because your crew has to tear down all your gear and pack it up in the trucks. You don’t have an after show party so you can drink into the early hours of the day. Most after parties are the source of trouble for bands. I remember leaving an event with Jimmy one night at the beginning of my career with him and he told me, “Know when to leave a party. When the shit goes down you don’t want to be there”. Jimmy mentions some of this when he inducted the Eagles to the Rock and Roll Hall of Fame. Glenn and Jimmy did find time to work together. In the early eighties Jimmy was touring, the Eagles were on hiatus and Glenn was writing songs for his solo career. When Jimmy would leave town he had some of his road crew watch his house for him. Glenn loved a good comedy and he ended up helping Jimmy write the song Gypsies In The Palace. If you know the song you’ll understand the comedic factor since the story is about house sitters that take advantage of your hospitality. The song is on the Last Mango In Paris album and if you listen to it you’ll hear a fake phone conversation between Jimmy and someone who is going on the road asking if he knows anyone who could house sit for him. That someone is Glenn Frey. Thank you for all the songs. Thank you for all the stories that go with them. Sail on Glenn Frey. Take it easy.