Lookin' for a Scary Story? This Place Is for You 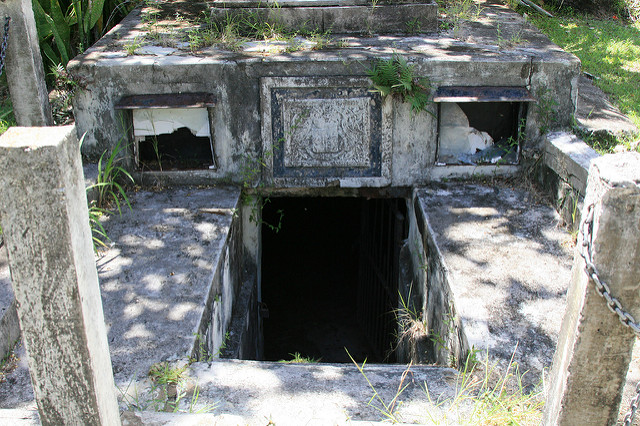 Get ready. We’re giving you somethin’ a little different this time around. Had a long day lounging in the brilliant sun? Crystal clear water and margaritas not your thing? How about a dark, supposedly haunted crypt to let that aloe vera kick in? At first glance, the Chase Vault looks like nothing more than a semi-sunken tomb. But its history of paranormal activity has left locals baffled for years… Located in the Barbados cemetery of the Christ Church Parish, the vault was originally built in 1724. It was purchased by the Chase family when their daughter, Mary Ann Chase, died at the tender age of 2. A few years later, Mary Ann’s older sister Dorcas died, followed a month later by their father. All were entombed within the vault. Okay, so a happy island story this is not. It’s pretty sad and creepy, but, here’s where it gets interesting. After being sealed off for years, the entrance to the tomb was removed. The burial team discovered that the three coffins inside had been violently tossed around and were standing against the walls of the tomb. There was no evidence of human tampering, so the main suspicion was of an earthquake or flood. The only thing standing in the way of such a rational explanation? None of the other vaults were affected in the same way. (Despite this bizarre occurrence, all of the coffins were placed back in their original places.) Fast forward a few years later, and the vault was once again opened to add another body. And yep, you guessed it, the coffins had been tossed around once again, lying all about the vault. Members of the church, desperate to get to the bottom of this, placed a layer of sand on the floor to detect any footprints should the culprits strike again. The vault was re-sealed once more. The story of the haunted vault quickly spread throughout Barbados. After years of building itself into a ghostly legend of sorts, curiosity within the community reached a boiling point – could it have possibly happened again? The local masses gathered around the entrance with bated anticipation. The vault was opened… Well, let’s just say there’s a reason all of the coffins were removed from the vault and reburied elsewhere in the cemetery. But, lucky for you and the whole family, the vault remains open to this day. So grab that margarita if you dare and toast the spirits that loom in the dark. Photo: Flickr Creative Commons