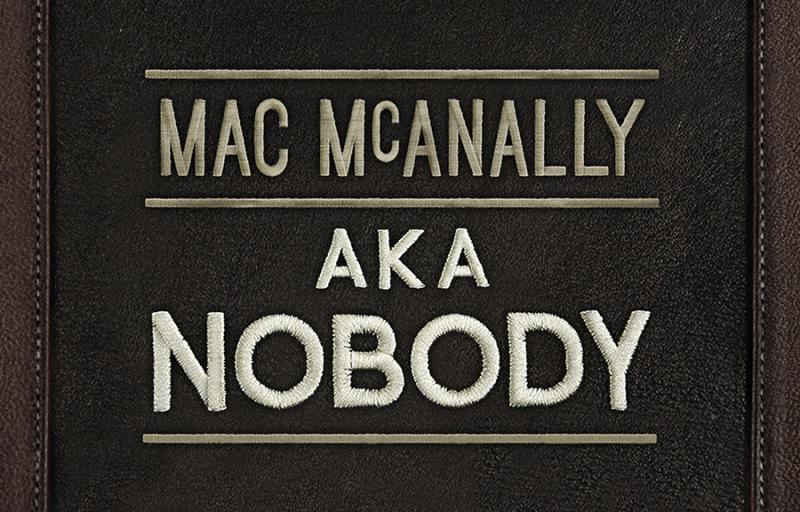 On Sept. 18, the world will be reminded why Mac McAnally enjoys unparalleled respect among the country music elite in Nashville. Set to release on Mailboat Records, A.K.A Nobody is McAnally's latest solo album, sung, performed and produced by the much beloved session ace. All but one of its songs were written by McAnally, either on his own or with illustrious co-writers including Jimmy Buffett, Kenny Chesney, Zac Brown, Sonny Landreth, Chris Stapleton, Al Anderson, and others. Working with an all-star assembly of friends and studio colleagues, McAnally achieves a rare blend of deep soul and polished technique on each track. His expressive range is on full display -- swampy blues on "Place Where You Belong," some exotic Parisian-style swing on "Zanzibar," a saucy Cajun swagger on "Loser Gumbo" with McAnally rocking the piano as Sonny Landreth wails on slide guitar, complex but catchy pop reminiscent of Steely Dan's best on "Someday," straight-ahead, steel-sweetened country with Southern rock seasoning on "Coast of Carolina." And perhaps the album's biggest surprise, "With a Straight Face," a sensitive portrayal of two gay children raised by parents who can't understand their kids are "something God made." "I have a heart for the underdog and for the oppressed and persecuted," McAnally says, addressing "With a Straight Face." "And I have close friends who have suffered for no good reason I can see. This song is for all the above." McAnally's depth and breadth as an artist are no secret within the recording community. Born in Alabama, raised on church choirs and formal lessons, playing pro gigs at 13, tutored on the mysteries of session excellence at the historic Muscle Shoals Studios and relocated to Nashville, he was an essential ingredient on studio dates with Linda Ronstadt, Dolly Parton, George Strait, Lee Ann Womack, Randy Travis, George Jones, Billy Joel and many other headliners. He's traveled the world as a member of Jimmy Buffett's Coral Reefer Band. His peers have honored him every year since 2008 as Musician of the Year at the CMA Awards. And with a track record that includes writing No. 1 hits on his own for Kenny Chesney ("Down the Road") and Alabama ("Old Flame") as well as penning chart-toppers for Sawyer Brown ("All These Years") and Shenandoah ("Two Dozen Roses"), it's no wonder that he has been voted into the Nashville Songwriters Hall of Fame. "This selection of music made me stay up late and get up early, filled up my fairly big heart and historically large head for the last several years in between also working on musical projects with other artists, which I also love to do," Mac says. "Because of the long process in recording this album I had the chance to give some long attention to the songs that demanded it, and the ones I thought would benefit from a spontaneous joyfest in the studio with a great band were saved for last. I'm very proud of both the work and that my fans continue to follow my little career. Small though it may be it's one of the biggest blessings ever. I'm grateful... and to borrow one of the song titles 'Proud To Be Alive.'" The ironic title notwithstanding, the music of A.K.A. Nobody speaks to everybody. This is music for all who love the marriage of art, craft and passion that Mac McAnally -- and few others -- have achieved. A.K.A. Nobody track listing: 1. A Little Bit Better (Chris Stapleton and Mac McAnally) 2. Last But Not Least (Zac Brown Wyatt Durrette, Jimmy De Martini, Coy Bowles and Mac McAnally) 3. Mississippi, You're On My Mind (Jesse Winchester) 4. With A Straight Face (Mac McAnally) 5. Don't Remember Leaving (Mac McAnally) 6. Zanzibar (Mac McAnally) 7. Place Where You Belong (Al Anderson and Mac McAnally) 8. Proud To Be Alive (Mac McAnally) 9. Better Get Your Story Straight (Mac McAnally) 10. Everything (Ain't Too High a Price) (Mac McAnally) 11. Loser Gumbo (Sonny Landreth and Mac McAnally) 12. Coast of Carolina (Jimmy Buffett and Mac McAnally) 13. Someday (Mac McAnally) 14. Island Rain (Kenny Chesney and Mac McAnally) 15. Working Prayer (Mac McAnally) Pre-order now on Mailboat Records. Mac McAnally on tour: AUG 13 First Niagara PAvilion - Pittsburgh, PA * AUG 15 Xfinity Center - Mansfield, MA * AUG 18 Nikon @ Jones Beach - Wantagh, NY * AUG 20 Susquehanna Bank Center - Camden, NJ * AUG 22 Alpine Valley Music Theatre - East Troy, WI * SEP 10 Lee Hall Auditorium - Starkville, MS SEP 26 La Cigale - Paris, France * SEP 27 La Cigale - Paris, France * OCT 15 Santa Barbara Bowl - Santa Barbara, CA * OCT 17 MGM Grand Arena - Las Vegas, NV * OCT 20 Isleta Amphitheatre - Albuquerque, NM * OCT 22 Hollywood Bowl - Hollywood, CA * OCT 24 Verizon Wireless Amphitheatre - Irvine, CA * NOV 7 Meeting of the Minds (Casa Marina) - Key West, FL DEC 31 Barclays Center - New York, NY * * These shows are with Jimmy Buffett as part of The Coral Reefer Band. Pre–order from Mailboat Records now! Orders will ship to arrive on or around release date of September 18th.