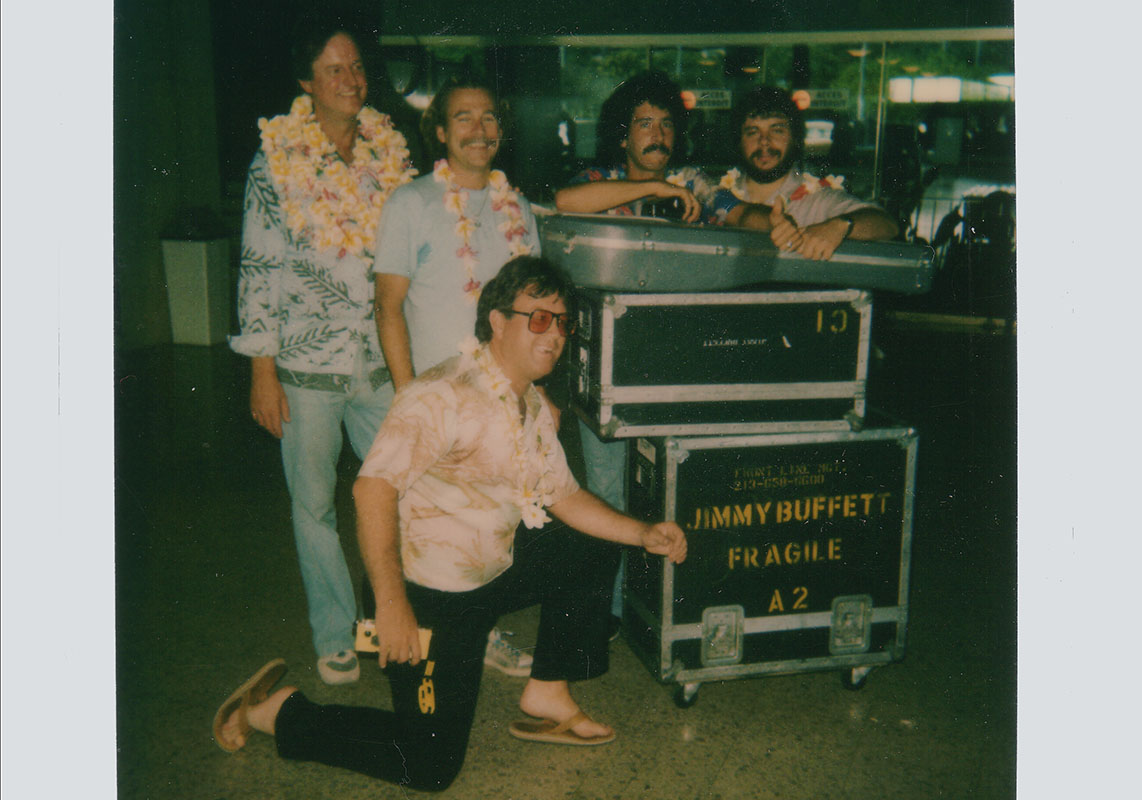 The band in Hawaii with Tom. Photo credit unknown.

The Pacific has seen many conquerors. Most came on on boats, seeking discovery and domination of land and people. History is full of the after effects of their deeds. But fortunately for those who found themselves settling or just visiting the island of Oahu, there was a gentler conqueror, who came ashore there from Michigan and ruled the air waves of Hawaii for six decades. His only weapons were vocals chords that made the speaker in your radio rattle, and a passion for music and the people who played it. Tom Moffatt was the voice of Hawaii to locals and visitors alike. As a promoter, he brought every kind of music imaginable to the islands. I happened to be one of those lucky coconuts that dropped from his tree. The first time I ever played for him was in October 1979, opening for the Eagles at Aloha Stadium. When I met Tom the first time at that gig, I remember thinking, "This guy has the best job in the world. He lives in paradise, plays music on the radio and promotes shows under the stars." It wasn't long before we were doing more than business together. We became friends. There are probably thousands of Tom stories being told these days through the islands he loved and beyond. I was so lucky to have shared adventures with him. We kind of had our very own tales from the south Pacific. I traveled back to Hawaii for countless numbers of shows at the Shell, the tennis court and convention center on Maui, and the old Kona Surf on the big island. But, my favorite of all our adventures was the trip to Norfolk Island and Tahiti. I had long lost relatives in French Polynesia and I needed to figure out a way to get there. Somehow, I convinced Tom to put me on a variety show he was taking there. I opened the show, at the Holiday Inn in Papeete, for a Tahitian beauty contest, Lowell Gardner, a hula dance from Hawaii and John Rowles, a big voice singer from New Zealand. That was the first show. He then added a second show at the cultural center and I headlined. Ticket sales were slow in Papeete (duh?), so Tom had this idea to get the word out about the show. I did a few local early morning radio in French, and then got a message to meet him downtown at the harbor when I was finished. When we met up, he had a stack of show posters in his arms, a hammer and a bag of nails., "Yes sir," that voice bellowed with a grin, and then we proceeded to nail a show poster to every palm tree within sight of any boat that had an American home port painted on the stern. Tickets sales got a little bump. Then as luck would have it, an American research vessel dropped anchor in the harbor on show day, and around 150 with marine biology students from the Alabama, Mississippi and Louisiana Americans came off the ship for shore leave and we sold out the show. You can't make that stuff up. I saw him for the last time, a few weeks ago, when I had come to Honolulu to do my little role on Hawaii 5-0, that he was instrumental in procuring. He was sick and he knew it, and so did I. Still we had a wonderful visit, and the Colonel just treated it like one of our usual "catch ups" that I always looked forward to, though we both knew, it was our last time together. That was never mentioned, and it was classic Colonel time. No long good-byes, just wonderful stories and some really good laughs, right to the end. I am in Havana tonight on my way south for the holidays, and I will raise a glass, or two, this evening to my dear friend, mentor and pal, and utter those two words that he had greeted me with for 36 years. "Yes Sir!" Aloha Colonel Tom.   Jimmy Buffett 15 December Havana, Cuba